Posted by Malcadon at 5:47 PM No comments:

[I made this mutant based on a picture I found, made by Philippe “Caza” Cazaumayou. For folks that don't know, Caza did work for Métal Hurlant (Heavy Metal magazine), and he worked with film producer René Laloux, for the French movie Gandahar (aka Light Years). Gandahar has is own unique “transformes” (mutants)] 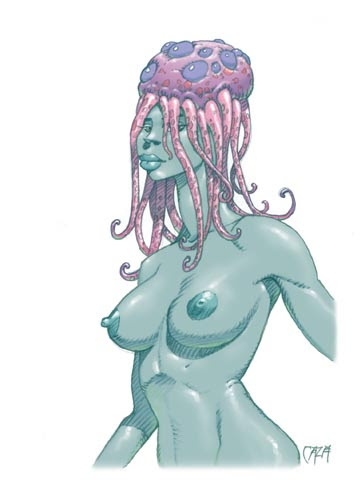 The mutation can makes for an interesting complications. If you can keep them from taking over you PC, then they can boost mutant's mental abilities.

These mutant scyphozoa* dwell near bodies of water – both fresh and salt. They usually wait for some random creature to make their way to the water (to drink from it), so they can attach themselves to the creature, in order to find new sources of water. A successful attack results in the Brain Jelly attaching itself to the creature's head. The Brain Jelly may choke the creature (use what rules applies), or perch itself on the creatures skull in order to takeover the creature's mind (a mental attack is needed to resist). Mindless animals generally gives up without a fight, while intelligent creatures usually fight their control. Taking over a human (or some other civilized being) might make for so unusual situations, as Symbiotic Brain Jelly are usually ignorant of even the most basic of human customs. They generally rely on an animal's instincts to survive, and they suppress higher-order intelligence to keep the creature subjugated. So, a human might get controlled while bathing in the river, just to wander around naked (no sense of modesty), and eventually die of exposure after nightfall (ignorant to the fact that humans are not naturally insulated to cold weather). Some Brain Jellies learn to cooperate with intelligent beings, while some beings enjoy the powers that comes from these hosts. With such mutual control, the subjected being benefits from both creature's mutations, plus the Quickness mutation (the synergy of both minds) and the Defective Dual Cerebellum defect (the Brain Jelly being the “Hyde” brain). Androids and Mutant Plants cannot be controlled by these creatures.

Brain Jellies can see in all directions do to their many eyes, are invisible while underwater, and their skin is vulnerable to weak acids – like acetic acid (wine & vinegar) and citrus acid (lemon juice). Such acids are treated as acid attacks. MLs might consider giving them an extra (random) mental mutation, if it seems right, but how that stand, they can really enhance a mutant with offensive mental mutations.

The topless chick is for display purposes only – the boobs are just a plus. ;P

*yes, I know it the technical term for jellyfish (Latin for bowl), but it sounds like a cool name for a giant kaiju monster, that is not necessarily a giant monster jellyfish. Godzilla vs Scyphozoa! How cool is that?
Posted by Malcadon at 11:29 PM No comments: