I recently discovered a heavy metal band called Bal-Sagoth, that based their songs off the yarns of Robert E. Howard, H.P. Lovecraft, and others. Being a Conan fan, I wanted to get strait to the Hyborian Metal, but I get sidetracked. While searching I discovered something quite unique. They made a song about a Silver Surfer story by Jack Kerby, where Silver Surfer has to deal with the Fourth Celestial Host (basically, space gods with the power to kick Galactus' ass!). I'm not a big fan of superhero comics beyond the 70's and 80's X-Men, and the song has a lot of narrative, but their is something epic about the song! Maybe its the way Silver Surfer is up against the all-powerful Celestials. Maybe is the way the lyrics ties in with the comicbook mythology. Maybe its the way it mashes with Jack Kerby's art. Well see it for yourself:

I cant really put thoughts to words, but this somehow inspires me!
Posted by Malcadon at 1:06 PM No comments: 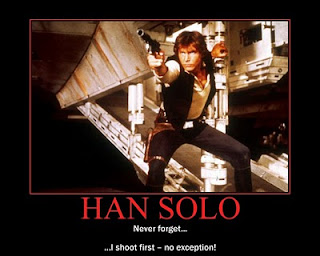 Well, I just had a big score over the weekend! I use an internet service called Freecycle. Its an exchange site for folks to get rid of old stuff, so it wont take up a landfill. I found a lot of good second-hand stuff from it – books, games, movies, furniture, electronics, clothing, my last two pets, and even friends. And all for free!

My huge score is a large collection of Star Wars books. It range from the earliest books, to the newer prequel-based books. I have the Rogue Squadron series, the New Jedi Order, and dozens of others. What I have been really looking forwards to, is Han Solo at Stars' End, and the two books that follows it. Long before Han's unblinking head side-step of Gredo's blast fire fiasco or the introduction of Malcolm “Mal” Reynolds, Han Solo was the unquestioned rogue-scoundrel of the universe!

Well before I was born, my family have been Star Wars fans since the movies' development – it seems that the casting of teen sex-symbol Mark Hamill attracted a lot of young female fans. Growing up, I hear a lot about the Star Wars Mythology – stuff not mentioned in the movies. I grew up hearing snippets of Han's past, learning about how Anakin Skywaker became Darth-Vader (I was told that he shot down by Obi-wan, and his fighter crashed into a volcano), and other stuff. I also seen a lot of Star Wars movies growing up, so then I got older, I lost interest. Now that I'm even older, I'm reminiscing over thing from my past (old shows, comics, and so on). I been remembering all the things about Han Solo's past, so now I have the chance to read about it. I hops its good!
Posted by Malcadon at 11:19 PM 2 comments: