For those who don't know, Crimson Blades is an D&D-styled game by Simon Washbourne of Barbarians of Lemuria fame. The rules are simple and uses only d6s — to-hits, hit points, damage, saves, etc. The setting found in Crimson Blades is the Crimson Lands, a dark-fantasy/sword & sorcery world shaped by decadent, dying race of dark elves based on Elric of Melniboné.

Not too long ago, I purchased the Crimson Blades core rulebook and the Crimson Lords rule supplement. Later I found out that the game is going through a major rule overhaul and is going to be divided into four core rulebooks — Crimson Blades, Crimson Scrolls, Crimson Lords and Crimson Lands — for an upcoming box set. The best rule change is the way it streamlined the way you make rolls. In the original rules, you only roll one die, but the target number lowers as your character gains level. For example, the primary skill of a Thief is rated as "3+", or a three or better on a d6 roll. In the new rules, you can gain additional dice during advancement for different rolls, and you only need a 5 or 6 for success. The primary skill of a Thief is now rated as "2D", or two dice rolled to get a 5+ on at least one die. The rules also changed defense form a third edition D&D model (adjusted for d6 rolls) where DEX and armor adjust a single Armor Class score, to a Conan D20-like model with a basic dodge defense score (adjusted by DEX and shield-use), called Defense Class, and Damage Reduction for body armor. There are a number of other changes. All around, this is a greatly improved system, but I would get into the details in an other, fuller review.

Here is what a (revised) Crimson Blades character looks like using my favorite old-school D&D "Iconic" as an example: Morgan Ironwolf. (from Basic D&D, 2nd ed)

In the Basic D&D rulebook, she is a first level Lawful human Fighter. That matches up with what is available in CB.

A Dexterity score of 13 means no adjustments to rolling to hit, Defense Class, or Reflex saves.

A Constitution score of 14 means a +1 to Hit Points or Fortitude saves.

A Intelligence score of 7 means a -1 to figuring out problems, and is granted no additional languages. She is unable to cast spells or summon.

A Wisdom score of 11 means no adjustments to Willpower saves or to notice things.

A Charisma score of 8 means no adjustments to influence people, and she has up to 4 loyal hirelings.

As a Fighter, she meets the 9+ STR class requirement.

She has the option to choose Fort or Ref as her primary save, and chooses Fortitude. At first level, normal saves are only one die (1D), while a primary save uses two dice (2D). Her saves are: Fort 2D+1, Ref 1D and Will 1D.

Her Hit Dice is "1d6(+2)" at first level, meaning that she rolls one die for attacks-per-round and Hit Points with the the bonus applied to the later. With CON, her Hit Point roll is 1d6+3. As a 5 was rolled in the book, she gets 8 Hit Points.

She can use any weapon or armor, including shields. Her Armour Training allows her to ignore DC penalties for wearing medium-heavy or heavy armor. She can choose one type of weapon to be her Favored Weapon, which grains an extra Hit Die to attacks and Fighter Stunt rolls while wielding her preferred weapon. As she starts with a sword as her primary weapon, her Favored Weapon is (normal) Swords. She is also capable of preforming special actions in combat, like disarming foes, cutting rope with an arrow, unblousing a woman with the sword-tip and the like with a Fighter Stunt roll. It is equal to her Hit Die plus STR or DEX. (In her case, STR.)

The revised Crimson Blades rules dropped Experience Points in favor of Adventure quotas. As she is a fresh character, her (total completed) Adventures is marked as 0, with only one Adventure needed to reach second level.

As noted, her Alignment is Lawful. Unlike Basic D&D, Alignment is not about morality, but an adherence to order, balance or discord on a social and cosmic level. In her case, "Law implies honor, trustworthiness, obedience to authority, and reliability. On the downside, lawfulness can include closed-mindedness, reactionary adherence to tradition, judgmentalness, and a lack of adaptability. Those who consciously promote lawfulness say that only lawful behavior creates a society in which people can depend on each other and make the right decisions in full confidence that others will act as they should."

I ran into a problem were the cost of mail armor and the bow are much more than what is printed in Basic D&D and goes beyond her original budget of 110 gold pieces, so I added the end result. Silvered weapons are not apart of the CB equipment lists, so it was dropped. I added some additional equipment to round-out her gear. Here is her inventory:

Her mail armor can absorb 3 points of damage, per hit, and her shield raiser her Defense Class by one, making it 4.

With all her armor, weapons and gear, she counts as having 7 "Things" — an abstract system of encumbrance. (Her cloths and gear counts as one thing.)

Her above average Strength pushes her encumbrance to allow her to carry 6 things and not effect her rate of movement, but since it is one over, her speed is reduced to 9 yards a round.

Lets use assume that she is from Dralucia, a fairly wealthy and well-connected nation that make a great starting point in the Crimson Lands. Her primary language is Dralucian, and since reading & writing counts as a language in itself, she is illiterate.

And finally, here is her card: 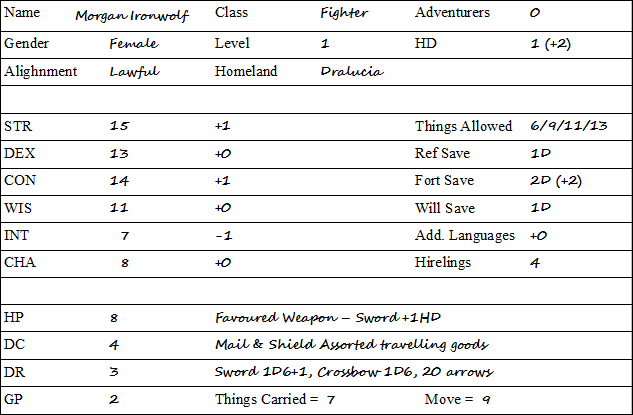