I Just got done watching the first four episodes of The Mandalorian.

HOLY STUCK-UP, HALF-WITTED, SCRUFFY-LOOKING NURF-HERDER ON A TAUNTAUN!!! THAT WAS GREAT!! IT HIT THE GROUND RUNNING, ALL THE WHILE HITTING ALL THE HIGH NOTES!!! I HAVE NOT BEEN THIS EXCITED ABOUT STAR WARS SINCE SEEING YODA IN THE LAST JEDI OR WATCHING THE ORIGINAL TRILOGY ON THE BIG SCREEN FOR THE FIRST TIME!!

The new series takes the original Boba Fett form the Hoilday Special — twin-prong zap-rifle and all — and puts him in an Akira Kurosawa-inspired Spaghetti Western and the seminal manga Lone Wolf and Cub. It is a well-written and well-acted cinematic series with just the right amount of practical vs CGI effects and lots of beautiful props and locations. You'll find a lot of hommage to the Star Wars franchise and the media that inspired it (Spaghetti Westerns, Kurosawa films, Lone Wolf and Cub, etc.). 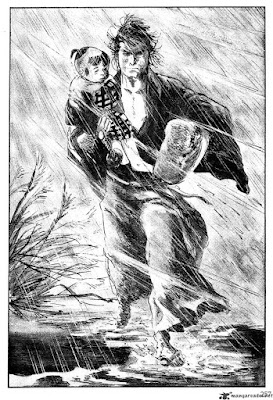 I'm going to assume everyone and there dog knows about "Baby Yoda". The internet cant get enough of the Baby Yoda (by the way, he is not actually Yoda, but for the lack of a species name). You can already find memes of him on YouTube (search "Baby Yoda Car Radio"). And yes, he is key to the plot. I know I'm not the only one wanting to sodomize the corpse of Walt Disney with a thick wad of cash to get a damn Baby Yoda plushy for the holidays. IT BETTER BE DAMN KUWT AN NOT SOME SOULLESS-EYED FUNKO POPS FIGURE!!!

In a nutshell, the series is about a faceless Mandalorian Bounty Hunter named Dyn Jarren was hired to recover someone, no questions asked. Once he found him, the nameless "Child", he goes on the run to keep the child safe. That is it! Its an on going series with a big mystery. 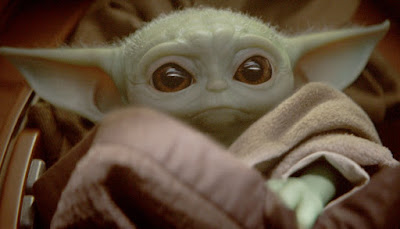 ALL HAIL OUR NEW HYPNOTAOD!!!

Unless you are one of those pedantic souls who cannot stand to see a highly unnoticeable boom-mic, or one of those stupid asshats who bitch about Star Trek (of all things) having "too much diversity", then, chances are, you are not going to like anything good, you miserable pieces of shit! For everyone else, I highly recommend it. So far, 5-out-of-5!

Is it worth getting a Disney+ subscription? Fuck no! They are a shitty company and I question their cyber-security. Plus, in the Information Age, why pay for something when you can pirate! ARRRGGG!!! (Or if you really like it, buy the physical media.)
Posted by Malcadon at 10:45 PM No comments:

Dead in the Water (for MCC RPG)

If it seems that I have not posted in awhile, that because I have been caught up with real life — the bane of all RPG players.

I was working on another art project with Tim Snider and the final product came in my mailbox. Unlike the other projects, this one is for Goodman Games' Mutant Crawl Classic (instead of Mutant Future), and this one showcase a painting I did for him years ago on the cover (while working on the last Mutant Future-based supplement). I was so happy to see one of my pictures on the cover, I wanted to shout it from the rooftop, but them I remembered I have a Blog (pardon the dust... and cobwebs... and the old Christmas boxes... and the dead hookers). 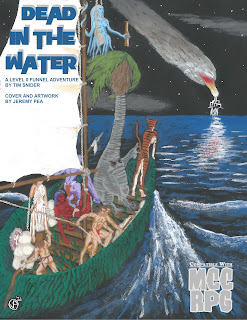 The 16-page booklet — first featured at Gamehole Con in Madison, WI — is a simple "funnel adventure", for 12 to 16 zero-level characters. For those unfamiliar with Mutant Crawl Classic, as a standard rule, players start with multiple characters due to the high mortality rate at level-zero — once they gain a level, they play a single character with a class, and all the abilities that comes with it. If you cannot tell, where Mutant Future is the spiritual successor of 2nd ed. Gamma World, MCC feels like a successor of 4th ed. GW.

The adventure that takes place in The Rainbow Sea, on the legendary Island of Fire, where horrible mutants that stalk a local fishing village dwell! Your mission is to head out it the island and deal with these foul creatures.
Posted by Malcadon at 4:34 AM 1 comment: 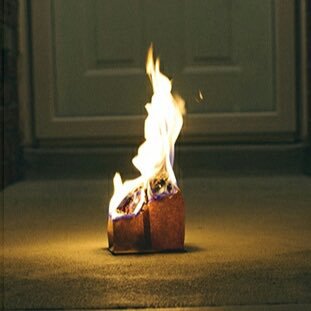 I just found out about this today.

Why am I not suppressed?

You can read it here.

I read their posts. I have no doubts about the honesty of the women that came forward. What they said about him is too specific and are the types of things people seldom think of when it comes to abuse. He is a narcissistic ass who treats people like shit and then looses his shit when people throw this shit right back at him. I recognize the patters, and I have known too many assholes like that!

Years ago, I used to follow his blog, and it had some good stuff on it. Some time after, I noticed how toxic he is, and they way he overreacts to anyone who disagrees with him. I hate the term "SJW" and I considered people threw that term around (along with "cuck" and "NPC" -- outside RPGs and video games) to be self-deluded shit-heels, but Zak acts as the poster boy of what Alt-Right wankers call "SJWs". Although, in Zak's case, he does not care about anyone else to really care about the equality of others, especially women. Much like a rich prick who throws a million to charity and a further 2-million to make sure the while world knows it, Zak puts on the badge of "social inclusiveness" to make himself look good.

While there are going to be apologists who will take his side, they can kiss my ass, along with those asshats who would start a campaign of threats and harassment on the woman... well they can choke on my dick! Well, people are dropping him left and right like the burning bag of shit that he is. His ability to find sites to publish his stuff is now limited. He is already banned from a number of forums (to be fair, he was already banned from many sides for being such a toxic person).

I wish to thank the woman for being brave enough to speak out about him, as the internet gets really nasty with women who do so. That kind of added abuse should also not be tolerated. I wish the women well and godspeed.
Posted by Malcadon at 6:31 AM No comments: