Military Structure of Mars (part I)

The military structure on Barsoom (Mars) was laid out in the books (Chessmen of Mars, I think?), but they were fairly simple. So I made my own. I posted in the Warriors of Mars (1974) sub-forum on the Original D&D Discussion community. The following are not canonical to the Barsoom Saga.

Here I added the Odthan and Zeethan ranks. The idea of an Odthan is that they are exceptional soldiers but without the authority that comes with being an officer. The Zeethan ranks separates combat personnel and technical specialists. Zeethans are capable fighters by their own right but their training and combat experiences is geared towards technical tasks and auxiliary support. There are some other non-military ranks near the end.

It should be noted that the way I have it, people are by default warriors. A person can choose to become a pacifist by taking an oath at a temple or gathering hall, were one sheds one's battle-harness (effectively naked) and time and ritual are required to brake the oath. A pacifist cannot take up arms, must submit if "conquered," and attacking an unarmed pacifist is considered weak and dishonorable. Only pacifists can become Healers or Diplomats. Chivalry is gender-neutral: all non-pacifist men and woman are treated as combinations, while pacifists are treated as "woman and children" on Earth.

Everyone who holds such rank have pledged fealty to a Jed or Jeddak, who also provides their equipment and supplies.


Than (warrior) are regulars within an army. Like Panthan, they are rank-and-file personal who serve as infantrymen, cavalrymen, sailors, marines, scouts, guards, etc. But unlike Panthan, they are loyalists and are not as expendable. Unlike the canonical notes, they have one upright feather (instead of two) noting their rank. They get standard pay.


Hythan (icon-warrior) are the seen as the bravest and most reliable solider in a group. In a troop formation, they are given the honor holding the unit's shield icon. This is a man-portable force-field generator that also serves as the unit's war banner. If he should fall, his unit becomes vulnerable to radium gunfire. They have a small upright feather on the left-side of their main feather. Their pay is x1.5 standard.


Odthan (greater-warrior) are veteran and elite troops. They are troops who proven themselves in combat, but lack the traits (tactics and leadership) to become an officer. They are given better treatment and priority over common troops. They are usually put into reserve, given critical assignments or guard important figures. Their rank feather is flanked by two shorter feathers. They get duplicity (x2) pay.

Padwar (junior-officer) are lieutenants. Unlike Earth lieutenants, one has to earn his way to this rank. They have two feathers noting their rank. Their pay is x2.5 standard. There are three tiers to this rank:
• Apprentices — They serve as aids to a Dwar, as they learn about tactics and leadership.
• Commander — They are squad leaders in command of ten men, a team of two-man flyers or a patrol boat.
• Staffer — They serve under a Dwar's command staff.

Dwar (lower-officer) are the Martian equivalent of an army Captain or naval Commander. They have three feathers noting their rank. Their pay is x5 standard. There are two tiers to this rank:
• Commander — They command an Utan (100 men) or a Frigate-size ship with outriders (small two-man flyers or patrol boats).
• Staffer — They serve under a Teedwar's command staff.

Teedwar (middle-officer) are the Martian equivalent of an army Major or naval Captain. They have four feathers noting their rank. Their pay is x10 standard. There are two tiers to this rank:
• Commander — They command a Dar (1,000 men) or a Cruiser-size ship with Frigate-size escorts.
• Staffer — They serve under a Odwar's command staff.

Odwar (higher-officer) are the Martian equivalent of an army General or naval Admiral. They have five feathers noting their rank. Their pay is x20 standard. There are two tiers to this rank:
• Commander — They command an Umak (10,000 men) or an entire fleet from a Battleship-size ship.
• Staffer — They serve under a Jedwar's command staff.

Jedwar (chief-officer) are the Commander-and-Chief of an entire national army, and are subordinates only to a Jed or Jeddak. They have five feathers separated by six short feathers to note their rank. Their pay is x50 standard.

Jed/Jeddak (chief/chief-supreme) is a leader of an entire nation, and is the Martian equivalent of a King. A Jed controls a city state, while a Jeddak controls several cities. Do to their access to the treasury and a royal stipend, they have no salary. They have a crown with several feathers.

Zeethan (technical-warrior) are specialist troops. They are technicians, artillery gunners, sappers, etc. They have a small upright feather on the right-side of their main feather. Their pay is x1.5 standard.

Zeewar (technical-officer) are like Warrant Offices, but with authority over Zeethan and Panzeethan personal, and are highly skilled engineers. They have two and a half feathers noting their rank. Their pay is x2.5 standard. There are two tiers to this rank:
• Apprentices — They serve as aids and apprentices to a Jedzee, as they learn about leadership and more technical fields.
• Commander — They are department heads or commanders of technical teams on the field.

Jedzee (chief-technician) are the Chief Engineers on a ship, or field commanders of an Engineer Corp. They have three and a half feathers noting their rank. Their pay is x5 standard.

Here are the ranks of the free agents. They serve no master, but fight for the right for money and a free pass within a city state.

Panthan (free-warrior) are basically mercenaries. They are seen as the least loyal and most expendable. Unlike Gorthan, they have nothing to prove and only fight for money. They must supply their own equipment and transport, and buy their own food and supplies. They have one downward feather noting their rank. They get standard pay.

Panzeethan (free-technical-warrior) are specialist mercenary troops. They are hired technicians, artillery gunners, sappers, etc. They have a small downward feather on the right-side of their main feather. Their pay is x1.5 standard.

Although they are not seen as rank and file troops or officers, I include these ranks, as they usually seen working alongside the military.

Gorthan (bonded-warrior) are captured and enslaved, petty criminals, or disgraced soldiers who are proving their loyalty and honor by serving as highly expendable troops, akin to Panthan troops, but without pay — basically penal/slave troops. This is considered a rank of distress and shame. They have no feather, and are striped of there battle-harness — effectively naked — save for a singe belt, a sword and wrist & ankle-bands of a slave. They are still provided for with food (mostly Usa) and board, as with any slave.

Healers (for a lack of a better name) are pacifists under oath, so attacking one is considered highly disgraceful and cowardly. They have a distinct dress, pouches for medical supplies and large colorful plumes. They will treat or lend comfort to anyone injured, regardless of their status or race.

Posted by Malcadon at 2:10 PM No comments:

I got this notice saying that Blogger is cracking down on nudity. 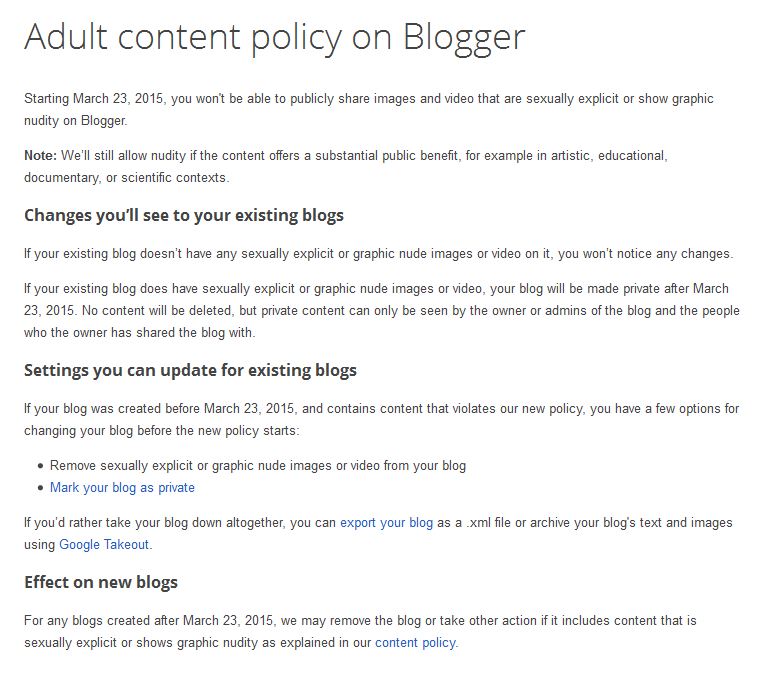 In this case, they making sites privet if they post any nudity. I hate when sites do this. Yes, they want to cut down on the adult content, and I understand that they don't want people to post hardcore, XXX-Rated stuff on it, but this gets iffy as nudity and artistic outlooks are highly subjective.

There is a stigma with nudity in the western world that is perverted into itself, and for reasons that eludes me, is affiliated with sex. Also the obsession with breasts — more specifically nipples — being "obscene" is a weird joke! I do not see topless women as an obscenity, and I see people who do as perverts.

In my experience, sites that tighten their belts on content only make things worse, and ultimately the administrators turn thuggish if they feel the clients are not complying enough. This is more then just nudity or adult content. This goes with religion, politics, language, criticizing the admins. Amplify this, by the fact that Blogger is own by Goggle — the company with the "Midas Touch" of shitty business decisions! "Don't be evil" my ass!

As far as content go, I will stay the course.
Posted by Malcadon at 5:59 PM No comments: