One odd issue I have with how people (mostly artists) try to portray Gamma World, and by extension Mutant Future, is how people try to make it look and feel like a Mad Max movie. Now don't get me wrong, I like the '80s-glam, Mad Max-inspired style of post-apocalypses movies (including all the clones that came of it), but to me it is a poor fit. That is, what you look past all leather-clad bikers and over use of hairspray, it is largely a serious, hard-edge genre that relies on there being an apocalypses sometime in the near future. The ecosystems have collapsed to nuclear fallout, once civilized people look like malnourished people from a hard-hit Third World country, animals are so scarce, people are having to eat diseased rats, and it uses a lot of modern technology — especially guns and heavily modified “Road Warrior” cars. Given the desperate, hard-edge nature of this genre, I tend to call it “Rat-Eater” fiction. I even call the future scenes from The Terminator movies “Rat-Eater” segments.

Now, Gamma World has always been called out for being silly and goofy, but most people do not understand the nature of the setting. Gamma World was the product of the era of Silver Age of Comic Books (1950s-'70s). For those that don't know, the Silver Age of Comics was an era of dramatic super-science, strange scenarios, weird worlds, and lots of campy elements. To think of how this relates to Gamma World, imagine if the first edition was illustrated by Jack Kirby. Let that sink in for a second... This is the guy who took the basic outline of Planet of the Apes and turned it into Kamandi: The Last Boy on Earth, and turned the comic book adaptation of 2001: A Space Odyssey into a crazy-ass acid trip... More so then the end of movie. Gamma World takes place after the people of a Jetson-styled future blew themselves up. The aftermath was a world where green-glowing radiation gave people and wildlife comic book-like mutations. Imagine a world with anthropomorphic animals, plant-men, mobile sentient plants, three-tittied bimbos, people that would make the X-Men look quaint... All in a world littered with the ruins of a once super-technological civilization, engulfed by the growth of ever mutating ecosystems! 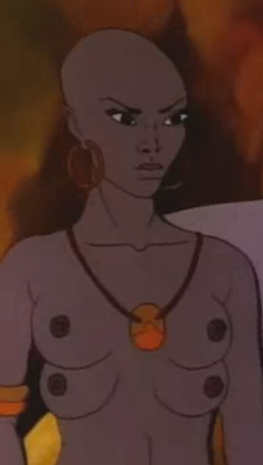 Why settle for just three? ;p

So yeah, they both have their cool aspects, but in the end, one is oil, and the other is... Well...? The Colour Out of Space. You can put some aspects of Gamma World into Rat-Eater, but it would loose its gritty, hard-edge feel. You can put some aspects of Rat-Eater into Gamma World, but they would quickly get overtaken by everything else. I mean, you could add leather-clad bikes with modern gear, but they would not stand a chance against all the mutants and tech-users that haunt such strange world such as Gamma World. On top of that, the Rat-Eater elements would just be seen as another odd element. That is, the leather-clad bikers would use high-tech gear (hover-bikes and blasters) and have leather-clad three-tittied bimbos with them. In other words, mothafuckin' Lobo! 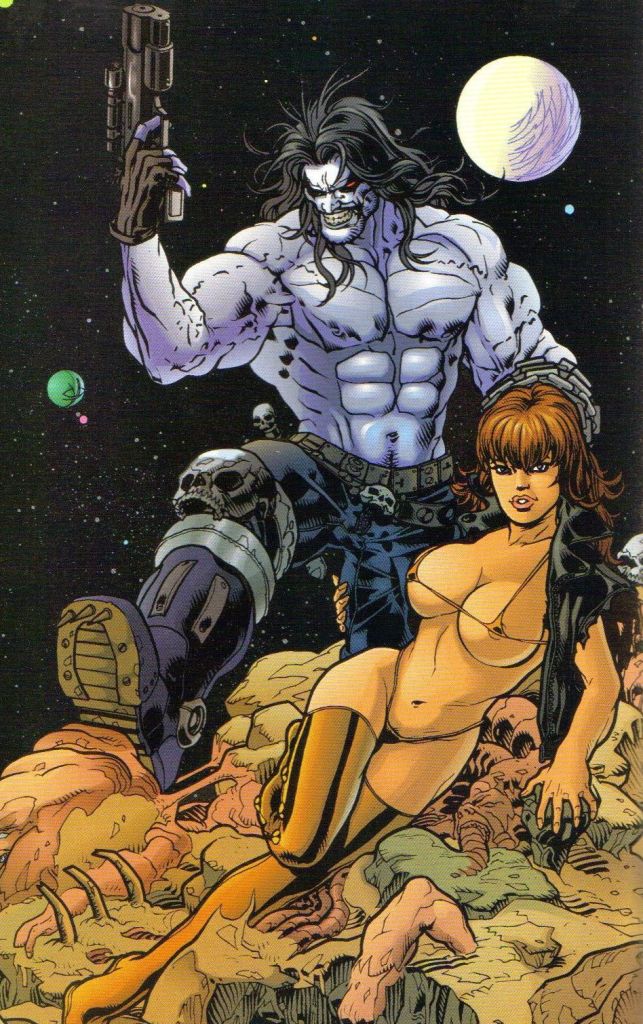 Yeah, like that, but with the chick form the above pic.
Posted by Malcadon at 12:22 PM 4 comments: