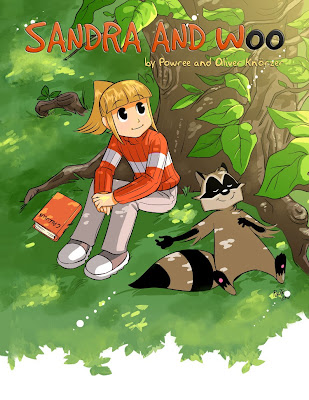 So here is Sandra and Woo. So enjoy!
Posted by Malcadon at 7:03 PM No comments: 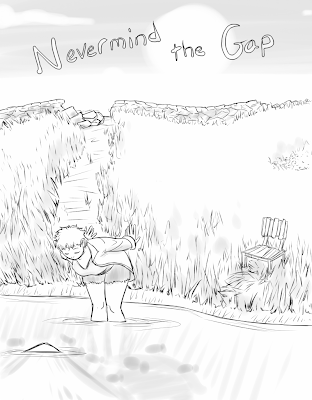 When it comes to comic books, I like the odd and obscure. Unless it is cleaver and character driven, I generally avoid superhero comics. Instead, I tend to focus on offbeat stuff most comic book shops would throw in the bargain bins or among the "underground" shelf. Although, the internet is a great place to find offbeat comics. There are countless websites devoted for any aspiring comic artist/writer to throw their creations out in the digital world! Most people would not think too much of their work, some others would be put off them, while an unknown number of people would deeply enjoy them for whatever reason.

Nevermind the Gap is something I quite enjoy. It is about a girl and technician who live on a small, futuristic town. As a sci-fi, it likes to boast the high-tech toys, and tries to tackle social issues. In this world, people live among androids. Their CPUs are built on quantum computing, so they are complex enough to allow for human emotion. Throughout the story, you see how the robotic people develop, interact with their fleshy neighbors, and deal with robotic mortality. One of may favorite toys they have, is a cloth that can turn invisible and can appear as other clothing. (As a role-player, that would go great in a style-obsess cyberpunk setting.) 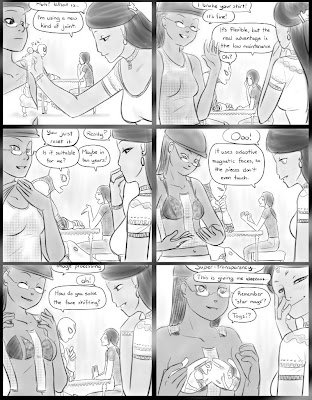 Beyond the sci-fi themes, much of the story is about romance. This comic is vary sexual! It deals with nudity in a casual way, but I don't see that as offensive, nor pornographic (in fact, I take offense to people calling casual nudity "pornographic"). It also deals with sex in a casual way - which is vary much pornographic. =P

The artistry of the characters are nice, in a semi-manga style. (The artist originally wanted to make them look cartoony, but had second thoughts, which was a good choice.) The backgrounds are not the best, but that is a major handicap for the artist. At times, you really have to keep an eye out for little details or read the author's annotations, as you might read the next page with no idea with what just happened. The pacing is slow, and the comic has a fairly good run (350+ pages). As much as I liked to story, I felt disappointed by the ending. Overall, I was quite hooked, but your miles will vary.

I could pour-out more texts about how good or bad the comic is, but I think I said enough for people to make-up their own minds about it. So if you like a smart and romantic sci-fi, and not bothered by nudity and sex, then check it out.


Say tuned for my next comic review, where I review a web comic that is smart and romantic, without being sexual.
Posted by Malcadon at 4:24 PM No comments:

Damn You Yahoo! Damn You to Hell!!!

I just got a massage from a friend that my Yahoo Mail account was hacked (it sent-out a whole lot of letters, beyond my control), but there is no way I can talk with him because the damn thing dont work right! For the past month or so, I can read and receive messages, but I cannot compose them — the rich text is too rich for my system. I figured-out the problem (after some Goggling, I found-out that it cant handle theme-changes), the goddamn "Send" button is grayed-out and useless! Shit, if its not one thing, its another!!! I have spent a good part of the morning figuring things out. (Mostly readings FAQs and Goggling-up Q&A forums)

I *could* get a new e-mail account, but I'm too nested with this account — switching over too much of a hassle. I have NEVER, EVER had problems like this before the automatic upgrade! If I cant resolve this stupid shit, I would be forced to change account.

For months, about a year ago, it would flack me about the upgrade. It says it was better, but when I tried it out, it was shitty, so I swished back. Then one day, it said that they are getting rid of the old system, so the switch was mandatory. The new system only adds a better appearance (a superficial thing at that), and programing is set to Kafkaesque. The options are limited and useless! That seems to be the motto of computer programing: "If it works well, lets make it shitty!"

So if I was really hack, I know not... For all I know, the system is just *that* buggy! So now I wait in limbo, unable to send out letters to anyone, unless I PM them on forums (unfortunately, such a gap is not possible with some).

Posted by Malcadon at 8:46 PM No comments:

For some time, I have been needing a graphic tablet. I held it off as I have been adverse to Photoshopped art, so I did not bother with it. Back in High School Computer Art and Illustration class, in the late '90s, I would draw stuff with just the mouse and I was really good at it. Unfortunately, this would prove bad an my wrists (although, normal computer-use is not helped matters ether). As an artist, I always felt more comfortable with traditional mediums, so I focused more on that. Although I have really developed my skills with penciling, line-drawing, painting (and if I had a way to get more green stuff, then miniature sculpting), but I know that the most efficient way to paint is with a tablet and a stylist. That is, if I make a mistake, I can 'undo' it, instead of whitewashing it out. I have a greater range of colors with a PC, and I can quickly make duplicates for multiple alterations (in case I want to work on paint schemes for vehicles and uniforms, or the like). And I can do a lot more things with an art program, then with traditional mediums.

So I looked into it, did some research and found most tablet computers (Androids, iPads and the like) to be too pricy or the systems were not to my liking. I then opted for a graphics tablet. The best one for my price-range was the $80 Wacom Bamboo (that is not a lot of money for most people, but for me, its a lot). Some money I got for the Holidays and the last commission has sent me over the budget for the device. I ordered it last week, and it came yesterday.

It is fun! The writing recognition takes too much initiative with how it thinks the letters should be (I'm quite dependent on spell-checkers, but I hate those that make mistakes that are WAAAYYY off base), but I don't really use that program, nor did I get it for that. Although, I'm still getting the hang of the drawing and painting, it handles great! I have found on DeviantArt, tutorials on using art programs — namely Gimp. They give great advice on many of the advanced functions, as well as tips on exploiting them.

As a plus, it also works as a mouse. Hell, it works better then a mouse! THIS GRAPHIC TABLET MAKES ME HATE MY MOUSE EVEN MORE!!! I never did liked the mouse! I always found them to be awkward and unintuitive, and they are wrong on the wrist (in fact, I changed my mouse to left-handed, to save my drawing-hand from further injury, and it really helped). I would rather have graphics tablets the default peripheral them the goddamn mouse!

Some day, I will get a tablet computer. But until then, I'm going to make the most out of my new toy! =D
Posted by Malcadon at 5:34 AM No comments: